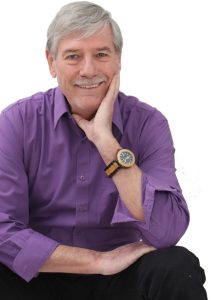 About me
My name is Heriberto Bluhm, I was born in Buenos Aires, Argentina in 1951. Since I was 12 years old, I was passionate about electronics and then electro medicine, a career that I followed and then dedicated 25 years of my life to technology, but one day the Universe woke up in my need for a change, a great change…

Everything in life has a meaning and every human being comes with a life mission. According to the Maya civilization, the day we are born we are invaded by a Lunar and a Solar energy (Yin and Yang) which they call «Seal or Kin». This combination happens again every 52 years and when we turn 52, we are given the possibility of making a strong change, a «Renaissance».

In my case, the seal that marked this combination of energies is Yellow Toned Sun. Its meaning is: «Bring the light» and the Mission says: «Open your rays to the light and expand them.»

This seal is governed by the crown chakra and its essence is enlightenment, universal fire, life, joy and consciousness. It is surrender, union, unconditional love.

At 47 I began to listen to my heart and act accordingly. I began, without knowing it, to carry out my Mission. 4 years later, when doing a Mayan Synchronary workshop, I learned about the above.

In the process prior to turning 52 and listening to my inner voice, I made the decision to make a life change, leaving the city to settle in the middle of the Sierras of Córdoba, Argentina, with the idea to have a better quality of life.

Finally, in 2003, when I turned 52, I discovered an infinite number of possibilities that life gave me to be able to nourish myself with healing techniques and methods. So it was that I started my training, first of all for a personal path of awareness opening and that I later shared and applied to the people who came to me to assist them in their  healing.

Since 2007 assisting people in Therapeutic Sessions applying these techniques in my consultations.
Since 2011 Official EFT Trainer – Emotional Freedom Technique, Certified by AHEFT

In 2010 I was trained by Dr. Eric Pearl in RECONECTIVE HEALING® as Reconnective Healing Foundational Practitioner and Reconnection-Certified Practitioner of THE RECONNECTION®

Work done:
Co-author of EFT Manuals in Spanish for levels 1 – 2 & 3.
Editor of the “Tapping News” Newsletter that is distributed online.
Conductor of FM Radio Programs on Integrative Medicines and Spiritual Issues.

Co-organizer of the 3rd International EFT Meeting in Santiago, Chile – 2010
Organizer and Host of the 6th International EFT Meeting in Córdoba, Argentina – Year 2011
Director of the Latin American EFT Academy in Argentina since 2013
Director of the Chilean Institute of Therapeutic Training since 2015
Speaker on Subtle Energies of the Human Body and the Universe
Creator of Tesla Healing 369®

How I arrived at Tesla Healing 369®

Infinity of experiences with Consultants, my training in Quantum Physics, Radionics and Quantum Biocommunication, coupled with the constant search for material related to energy beyond what is disseminated in common media, made me bump into a man from whom I had already heard in my university education. I mean Nikola Tesla. Of course, I was struck by his simple and humble way of talking about free energy and his experiments that showed that this was possible, but a utopia for the time Tesla lived.

I have also researched a lot about a theory of the German physicist Winfried Otto Schumann, who discovered a resonance effect in the Earth-Ionosphere system and which is now known with the term «Schumann Resonance». In physics this is called «transverse-magnetic wave».
It has been proven that these resonant waves vibrate at the same frequency as the brain waves of human beings (and of all mammals), that is 7.8 Hertz (cycles per second). Germany and Austria have experimented with these resonances and have developed and formulated new projects in quantum physics of 7.8 Hertz (Schumann frequency), considered these a normal biological constant of our hypothalamus.
A frequency that connects us to all human beings and where the Earth behaves like a huge electrical circuit. This opens a «field of communication between two neural systems», what we call telepathy.

Nikola Tesla had a lot of knowledge about this resonance of the Earth-Ionosphere system, on which he based a series of experiments. In these experiments he discovers that there are other types of waves of a special characteristic that, unlike Hertzian waves, become stronger with distance and travel at a speed several times greater than that of light.

In some of the Healing Methods that I learned, such as “Reconnection” and Instrumental Biocommunication with Quantec®, I could see that the healings performed at a distance, worked better than those in person, therefore I understand that this type of waves are present on our planet Earth.

In the course of the years 2002 to 2010, I went through a lot of teachers, courses and workshops, of which I highlight «The Flower of Life» «Sacred Geometry» and «The Reconnection», as some methods that have helped me to understand in a simple way, what Nikola Tesla wanted to convey to humanity almost 100 years ago. Thanks to the knowledge of Dr. Lynne Mc Taggart, who pours in her books «The Field» and «The Link», I managed to form my own idea of ​​how and why the therapies work in which we use our hands, the Universal Energy and Unconditional Love
It is precisely from this place that this method was created.

With the years of therapeutic experience I learned how important it is for the healing process that the Therapist connects with the energy charged by Love, which radiates from the heart. Love is the most powerful force, Love is the force of Life, Love is the Light.

In a short period of time I had found in Tesla Healing 369® an extremely powerful healing modality with great, and often fast results. Some patients began to report being cured of tumors, psoriasis, arthritis pain, chronic fatigue, back injuries, synchronicities in all areas of life, loss of fear, etc. But all have agreed that the aspect of evolution of their consciousness, caused by the frequencies of the energy of Tesla, is much more important than the healing itself.

“Tesla Healing 369® brings Light in the path of each individual, helping to realize that Love is the only vibration that can achieve the much desired Peace that humanity requires for a better life.” – Heriberto Bluhm

Nikola Tesla was the man, the physicist, who discovered the energy that is several times faster than the speed of light. Today scientists prove in their tests that there is no delay between the transmitter and the receiver, despite the distance of thousands of kilometers. Although Tesla did not get to apply this energy for healing onto other people, I always use it to obtain that great energy potential that allowed him to receive information from the Universe to achieve his inventions and discoveries. The time in which Tesla lived, was not conducive to disseminate this type of healing methods, but left the ground ready for a time in the future, when humanity were ready to receive it.

One of his most widespread phrases was: «I will no longer work for the present, I will work for the future» and I think Tesla was a visionary, when he said that «We are swirling in endless space at an inconceivable speed, everything around us is spinning, everything moves, everything is energy. There must be some more direct way in which we can take advantage of this energy”.

Tesla was a teacher in discovering it, but at that time humanity was not prepared for it.

Now, we can access these healing frequencies without resorting to technology or objects or symbols, simply by connecting directly with the energy of nature.

For this reason and in homage to the great Physicist Nikola Tesla, I call Tesla Healing 369® to this new method of healing.

Tesla’s phrase «If you knew the magnificence of the numbers three, six and nine, you would have a key to the universe» contains a very important key within this healing modality. Tesla discovered this key in the Vortex Mathematics that he developed.
I thank Dana Tir and Kristen Neiling, two people who have accompanied a part of my growth path, for having aroused interest in Sacred Geometry. Thanks to The Flower of Life and Merkaba I could understand that it hides Tesla’s phrase. That is why I combine this key with the Healing Energy delivered so generously by Nikola Tesla.